Every year during the month of June, the LGBTQ+ community comes together to celebrate Pride Month. It has become a beautiful tradition that commemorates the Stonewall Riots that took place in 1969 in New York in response to a violent police raid at the Stonewall Inn in Greenwich Village, New York. Today, these riots are widely regarded as pivotal for the following gay liberation movement and the twentieth century fight for LGBTQ+ rights in the U.S. and around the world. 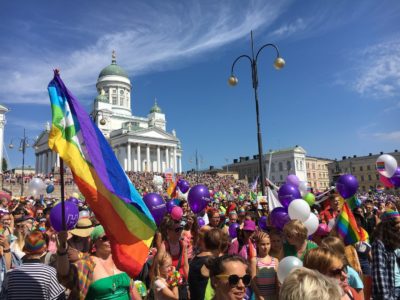 Pride in Helsinki, 2016 as seen from the author’s view.

While today and especially in our Western societies, Pride Month and the many Pride Parades held during this time in all the larger cities around the world are huge, colourful spectacles with people of all walks of life celebrating diversity in the streets, we must not forget that even today and even in liberal societies such as here in Switzerland, gay, lesbian, bi-sexual, transgender, queer and non-binary people still face discrimination, prejudice, harassment and hate.

Studies (such as 1, 2 and 3) show a clear connection between identifying as being part of the LGBTQ spectrum and a larger risk for mental health problems and suicide attempts. Similar studies have also found that 1 out of 4 University students or staff members who identify as either gay, lesbian or bi-sexual have experienced harassment due to their sexual orientation at some point in their career. That number becomes even more discouraging when considering transgender people, where 1 out of 3 report similar experiences. While it is probably impossible to get a clear and all-encompassing picture, such numbers make it very clear that notwithstanding all the progress we have achieved over the recent decades, we are still far away from true equality and inclusion of sexual minorities.

That is why even today, Pride Month is as much a reason to celebrate as it is an important occasion to stand-up for issues surrounding exclusion based on sexual orientation and gender identity. Be it political issues such as same-sex marriage, bathroom access or cases of bullying in schools or universities – discrimination comes in different forms and can be very subtle at times. Even though we have come a long way since the 60s, there still is a lot of work that we need to put in. But if we have learned something, then that we can do it – together!

There are still many ways to show support to friends and family that may identify as a sexual minority. It can be simple things such as displaying the rainbow flag on your window, or as a background during your next Zoom-call.

Here at the University of Basel and the Department of Mathematics and Computer Science, it remains to all of us to contribute to a warm and welcoming campus climate that includes everyone on the large diversity spectrum and to call out behaviour and structures that discriminate against sexual minorities (and any minority) in any way, either explicitly or implicitly. We at the We are Computer Science association are committed to help building such an environment and if you believe that action needs to be taken or you would like to get involved yourself, don’t hesitate to reach out to us!

Even though Covid-19 makes it difficult to celebrate Pride as one would in normal times, there are still many ways to show support to friends and family that may identify as a sexual minority. It can be simple things such as displaying the rainbow flag on your window, or as a background during your next Zoom-call. You can donate to an organisation that supports LGBTQ+ issues in your country or abroad. Or you can just be that one person to speak out when you encounter harassment or discrimination in whatever form. The most important thing is: Be an ally to the LGBTQ community and show your allegiance. Want to know more? Have a look!

So please join us in celebrating diversity in all its colours during this year’s Pride Month. We wish you all a Happy Pride!